The Los Angeles and Orange County industrial markets both have registered negative net absorption in the third quarter of this year, something that has been virtually unheard of lately in Southern California, where the growth of the logistics industry and other factors in recent years have generated a seemingly endless demand for industrial buildings.

After nearly a dozen years of continuous growth, container volume at the ports of Los Angeles and Long Beach continues to drop as of late.

After 11 years of consecutive growth, often near or exceeding double digit percentages, container volume dropped off at the twin ports starting in 2007, with volume falling 10.5% in Long Beach and 4.8% in L.A. year-to-year to September 2008, he noted.

“The question is: Is this the new reality, or will volume come back to LA?” DeCesare said.

The ports were hindered first by the 2002 lockout, then a labor and rail shortage in 2004 and in the past few years by Nimby opponents, stringent clean air programs and particularly by alternative ports in the US, DeCesare added. 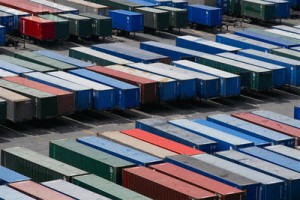 Container traffic to East Coast ports continues to grow, he noted, adding that several new ports on the other side of the country have opened, or expanded capacity, and that planned future capacity improvements to the Panama and Suez Canals will likely further hurt container volumes on the West Coast.

“The Southern California industrial world’s going to be rocked by these fundamental changes,” he added.

Much of the talk in that panel also addressed concerns about falling container volume at the ports. “Not to be a Chicken Little, and the sky is falling, but things are tough right now,” Panattoni said.

However, Panattoni was among many of the panelists at the RealShare conference who also expressed confidence that the Southern California industrial market will not only recover, but will continue to prosper, and much of that prosperity, most agreed, will be driven by the region’s own demand for consumer goods as the population continues to swell.

Schwimmer put in: “Cap rates are going up and I think they’re going higher.” He also stated his belief that the industrial market is only in the third inning in the overall economic scheme of things. “I think industrial’s going to get worse here,” he said.

Two panels closed out the day: “From Port to People,” which examined the reconfiguration of the supply chain and industrial logistics; and “Industrial Crossfire,” in which market leaders revealed the trends, companies and people to watch in 2009.

MacLellan, who talked about bureaucratic difficulties in getting projects done, such as necessary expansion of services, said to compete the ports have to keep pulling out “as many rabbits out of the hat as we can.” He also called for solidarity from the business community, particularly those who work in the industrial market, to garner public support for upcoming port initiatives.

Feemster agreed that public opposition is contributing to making the twin ports less competitive with others. “What were running into in Southern California is the Nopes, not on planet Earth,” he said.

Cross, who spoke about logistics trends and about the value of railroad-served transportation hubs, quipped: “If I had my druthers, I wouldn’t give the automotive industry that $25 billion, I’d give it to the railroads.”

RealShare Industrial West is one of an annual schedule of RealShare events that are produced by Incisive Media, the parent company of GlobeSt.com, Real Estate Forum magazine, Real Estate Southern California magazine and a host of other online and print sources of information about commercial real estate, legal and financial services, risk management and the marketing industry. Article by D. Jergler.

In the 2008 second quarter, 3.5 million square feet of building space was absorbed in the Central Los Angeles industrial market, similar to Q2 ’07.  Here is the interesting point:  space leased totaled 2,800,000 SF versus a paltry 751,000 SF sold – almost a 4:1 ratio.  The credit crunch and high sale prices have surely placed a damper on the sale market even though sale prices are relatively stable.

Availability Rate
The percentage of all space being marketed for sale or lease at a period of time in a given area.

Vacancy Rate
The percentage of all unoccupied space being marketed for sale or lease at a period of time in a given area.

Gross Lease (GRS)
A lease agreement in which the stated rent being paid to the landlord includes property taxes and property insurance.

Gross Absorption
Total number of properties leased or sold for occupancy at a period of time in a given area.