Sale-Leaseback transactions occur when a property owner sells their real estate and becomes a tenant of the property. It’s a great way for a property owner to obtain a cash infusion for capital spending for their business or to retire debt.

Sale-Leasebacks are particularly well suited to peak periods of the real estate cycle, when prices are at their peak. And prices have never risen faster or been higher in the Los Angeles industrial real estate market than now.

The below paragraphs are excerpted from “Economic Trends in California Real Estate: Realty Almanac 2018-2020“. It describes the mortgage interest deduction origin, whether buyer or seller reaps the benefit, and the fiscal impact upon the national treasury. After reading it you may come to agree with my view that this deduction should be phased out and the $70 billion in lost tax revenue could then be applied towards balancing the budget.

Interest deductions took root in the late 19th century. The first federal income tax was established in 1894 and all forms of interest were deductible. However, homeownership was not what motivated Congress to enact such a policy. An interest deduction was viewed primarily as a business situation. Most people at that time in history paid cash for their homes (as is the case today in countries with less sophisticated financial systems). Mortgages were generally only taken out by farmers or investors.

Not until the 1950s did the home mortgage gain anything close to its current significance. Since then, the home mortgage has become the common concern of the housing industry. Without a mortgage, most tenants wait until they accumulate savings equal to the price. The tax deductions and exclusions are now considered entitlements for those homebuyers who need to borrow and for those homeowners who sell.

The true tax benefits to the taxpayer of interest rate deductions for buying and owning a home were lost long ago. They were arbitraged away by increased home pricing and interest rates. Thus, the benefits are passed on to the seller (increased price) and the lender (interest and charges on increased principal). The howl today by industry insiders is that prices will drop if the deductions go away: exactly the evidence that subsidies go to the seller and the lender, not the buyer/owner.

The interest deduction loophole costs the Department of Treasury over $70 billion in lost tax revenue annually, to the benefit of sellers and lenders received indirectly via the buyer. However, the majority of debt- encumbered homeowners don’t see much for it, except for the wealthier among them. Only half of the tax filers who are homeowners are able to claim the deduction. Usually, they receive less than $2,000 in reduced tax liability (the rest have no mortgages and thus no risk of loss).

More than 50% of the federal tax benefit is taken by those few homeowners with incomes exceeding $100,000. It is fair to say those wealthier homeowners have the least need for a subsidy as an inducement to buy a home, since they are financially capable and most likely to purchase anyway. 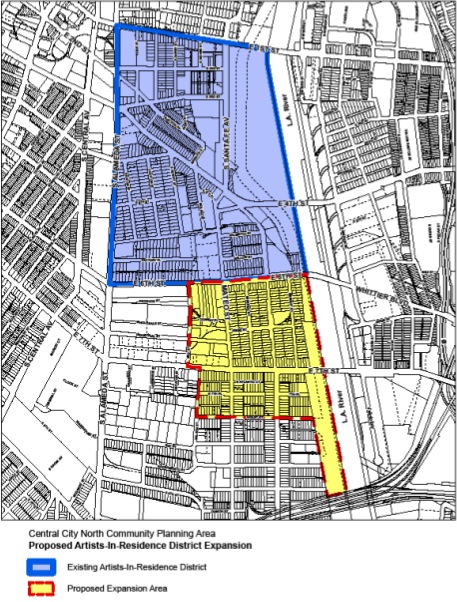 The City of Los Angeles is currently exploring the expansion of the artist live/work loft area into more industrial areas south of the current area.  The expansion would allow increased conversion of existing industrial buildings in the area to joint live-work uses.   A public hearing was held last week at SCI-Arc on 3rd Street.

Only obsolete industrial buildings should be allowed to be converted.

The Los Angeles Unified School District has agreed to pay $50 million to settle an eminent domain dispute with Meruelo Maddux Properties over 23 acres of land in Cypress Park which is located north of Downtown Los Angeles.  The site is commonly referred to as Taylor Yard.  Meruelo Maddux originally purchased the site for $31.8 million, snatching it from the claws of the LAUSD.

Here is another example of the misdirected LAUSD board removing more industrial zoned land from the city.  They should take residential properties for schools not industrial as industrial properties create the sorely needed jobs for L.A. denizens, especially the lower classes that live in Cypress Park.

Government sponsored programs are not the primary solution to urban decay such as drug trafficking and crime.  To restore a city and its neighborhoods, fight crime successfully and everything else will start to fall into place.  Just ask Los Angeles Police Commissioner Bill Bratton because he understands this concept.  It appears Mayor Villaraigosa is also taking this notion to heart while making an increase in the police force a top priority.  L.A.’s troubled neighborhoods will welcome more officers.