The Alameda Corridor is a 20-mile railroad “expressway” that connects the World Ports of Los Angeles and Long Beach with the national rail system. The Corridor began operating in April 2002 and its main purpose was to alleviate truck traffic on local freeways and create a more efficient way to move cargo containers from the Ports of Los Angeles and Long Beach to the Downtown Los Angeles rail  yards. Effectively, the Corridor has created an efficient solution to get cargo containers from the Ports to major inland distribution points in the Inland Empire and as far east as Kansas City and Chicago. As of April 2016, the Alameda Corridor was handling an average of almost 36 trains per day and over 11,000 TEU’S. The Alameda Corridor Transportation Authority (ACTA) owns and operates the Corridor and charges user fees to the railroads on a per-TEU basis.

The five-county Greater Los Angeles region represents the largest industrial market in the nation with approximately 1.0 BSF, connected by the region’s modern sea ports, highways, railways and airports. The region historically has boasted the strongest market
fundamentals in the country relating to rents, vacancy and availability rates and pricing. In Greater Los Angeles, the overall vacancy rate was 1.2% as of the fourth quarter of 2017. The market also generated 9.3 MSF of gross activity in the fourth quarter. 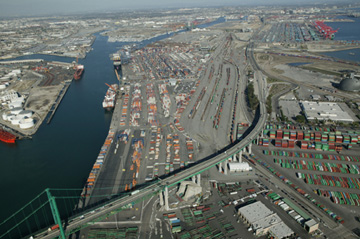